Get the latest Amazon tips and tricks for newbies or expert. Know what's happening and the get the latest on Amazon here.

How to Prepare your Amazon Inventory for Q4 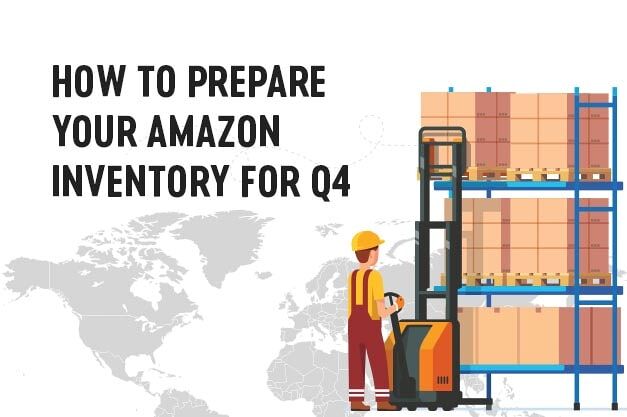 Q4 is arriving (hohoho)! Am I the only one excited?

I know it’s still July and the holiday season is still months away but as Amazon sellers, we need to make sure we’re fully prepared.

As the saying goes,

It is better to look ahead and prepare than to look back and regret.

You see, it has been proven time and time again that prepping for Q4 as early as July will bring more profits to your Amazon store once the biggest selling season of the year kicks in.

Manufacturing lead time alone usually takes 30-60 days to complete. Transit time by sea and port clearances take another 30-45 days. And if you factor in complete quality testing, it takes about 2 to 3 months of waiting before your inventory arrives at the Amazon warehouse.

And with that timeframe, you can see that July is truly the best time to start posting your orders and get your Q4 Inventory ready.

Why We Should Prepare for Q4

Third-party sellers sold more than 1 billion items over the holidays and hit double digit growth in the number of units sold that year.

For most businesses, Q4 makes up AT LEAST HALF of their annual sales. And this is because consumers have a holiday budget which they generally spend in the middle of November throughout the holiday season.

And with that much spending, imagine how much money you’re leaving on the table should you run out of stock just because you didn’t prepare your inventory ahead?

How Much Inventory Should I Keep for Q4?

Not all products are created equal.

There are those with constant demand all year round while some have seasonality.

And when we say “seasonal”, these are products which exhibit a huge spike in sales during specific times of the year.

So before you begin placing orders to your suppliers and ramp up your Q4 stocks, it is important to first run a seasonality test for each of your products to determine which needs the necessary inventory boost.

And the easiest way to do it is through the Keywords tool inside ZonBase.

This tool mines the Amazon database to give you the seasonality data of a product or keyword (worth 2 years!) every time you hit the search button.

Let’s say, one of your product offerings is a “diaper bag”.

From the image below, results show that the demand for diaper bags is consistent all throughout the year.

There is no observed surge in orders during Q4, which means there’s no need to stock up additional inventory for the upcoming holiday season.

But say your keyword is “wrapping paper”…

You can immediately see from the graph below that there’s a tremendous increase in demand during Q4!

This item is selling 10 units on a regular day but sales skyrocket to around 100 units daily during the holiday season.

Sales for wrapping papers are 10 times more during the Christmas season which means you have to stock up 10x more too in order to fill the demand!

The essence of Christmas is gift giving and all presents come perfectly wrapped – which explains the surge.

But would you know how much you’d stock up if you wouldn’t check the Seasonality graph first?

You see, just by running a simple seasonality test, you’ll know how much inventory you should keep for Q4.

And you’ll save yourself from the pain of regret caused by being “OUT OF STOCK” in the middle of a shopping rush during the most profitable months of the year.

On the other hand, the opposite is also helpful.

If there’s no surge based on the seasonality indicator, then there’s totally no need for additional inventories – saving you from unnecessary spending and wasted capital spent on storage fees.

Bottomline is: Planning inventory accurately has never been this easy.

All it just takes is a few clicks inside ZonBase to obtain crucial information that will make or break your Amazon business, especially during Q4.

How About Storage Fees During Q4?

Now that you know how beneficial the seasonality indicator is in planning inventory, there’s one more important information every Amazon Seller shouldn’t miss: STORAGE FEES.

These are the amount of money an Amazon seller pays to Amazon for the space his inventory occupies in fulfillment centers. The fees are calculated based on the daily average volume (measured in cubic feet).

However, storage fees for the holidays are NOT cheap.

Amazon charges more than 3x as much in monthly storage fees for the months of October, November and December!

In fact, high storage fees scares many Amazon sellers, prompting them not to stock up for Q4.

And the result? They start stocking out so early just when the holiday season is beginning to pick up.

And this is good news for you!

Cause what this means is there will even be lesser players during Christmas!

But only if you’re among the few data-driven Amazon sellers who will ramp up Q4 inventory because that’s what the sales history says.

So the biggest question is…

Which side are you on?

Nothing beats a readily available inventory during the year-end holiday rush. The last thing you want is to run out of stocks halfway through the biggest shopping season with no ability to replenish it in time.

So if you want to be among those sellers who made TONS of sales and raked MASSIVE profits during Q4, start prepping your inventory NOW!

Amazon’s 200-unit Storage Limit – Should You Be Worried?

Amazon Now Discloses Seller’s Name and Address! How to Keep Them Safe